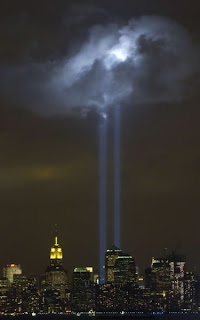 Every year, we watch as the names are spoken only five miles away. We remember that day when our world turned dark and silent and feel for the families of the innocent people who were too suddenly lost. The sadness, seven years later is worse than ever, in a still aimless world, thinking about where these sons and daughters, mothers and fathers, brothers and sisters and friends might be today, had their lives not been cut short in such a horrific and senseless way.

Each year I call my friend, who I was working with at the time as we walked back the 50 blocks up Central Park West, on that clear day, away from work, away from the sights we saw as we stared down sixth avenue all the way downtown in disbelief and home, finally, to find Jim who hadn't gone to work as he might have. He was to take photos at Windows on the World that morning in preparation for a job there later in the month but he couldn't do it until later that day he was told, because there was a breakfast meeting.
I always think of that breakfast meeting and feel so many things at once. Everyone has their own story.

A week after September 11th, 2001, in a car late at night on the 59th Street Bridge, we looked at the Manhattan skyline in silence. Our friend Ed, in the car with us said, "it's like the moon is gone".

On this particularly sad day in American history, I extend my love and condolences to all who have lost their moon, their stars, their loved ones.
at 11:22 AM

Debbie and Jim, We love you, Love, Mark, Joie, Grace and Annie

I just can't believe it was seven years ago.

Though nothing can bring back the hour
Of splendour in the grass, of glory in the flower;
We will grieve not, rather find
Strength in what remains behind;
In the primal sympathy
Which having been must ever be;
In the soothing thoughts that spring
Out of human suffering;
In the faith that looks through death,
In years that bring the philosophic mind.

***Seven years has not been enough to bring me the philosophic mind.

thank you for sharing your experience from that fatal day. listening to the names being read is still so emotional. it feels like it was yesterday. i'm glad you and your loved ones were ok. it's interesting how a simple change in a schedule can change our lives.
xo, c

That morning I was on my usual train, the 9:11 a.m. express to NYC. To this day, I still don't know why I didn't get off that train. 7 years later, the 9:11 leaves the station on time everyday. Without me on it. My heart goes out to all who suffered. May there be resolution, somehow, someway.

Powerful words. It is hard to think about the what-ifs. All of us have specific memories of the tragic events that day seven years ago, We will never forget and I am hopeful that our joint compassion will eventually lead to something good. Thank you for sharing.

Thank you for your story, and for remembering those that lost

Deb i could not imagine, my heart aches just thinking about, 7 years later still so much uncertainty,pain and suffering.

but hope, love and kindness is all around us. i feel those things for you and your family and friends.

thinking of everyone who lived through this. i can't even try to imagine.

My NY friend missed being in that area by going into work late... to be able to vote. Like your friend, she was one of the fortunate ones. My thoughts go out to the families of the ones who were not.

that was beautiful. thanks for that.

I'll never forget the fear and confusion of that day. Or the strong bond I felt with all other New Yorkers in the weeks that followed.

i got goose bumps when i read this deb... the "coincidences" of being there or not being there... the families that were stricken with grief... and we are still in a world of chaos. thank you for writing this and i also send my condolences to those families.

Lovely post - def. a day we will remember forever...

I remember the sense of loss I felt for all of those I did not know. We can't watch the news that day each year without crying for the lost ones and their families, and I know we still will, seven years from now.
Thank you Deb.