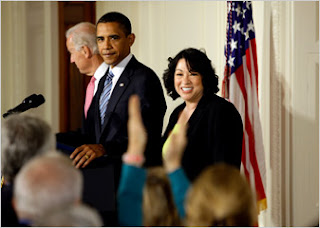 I am really excited about Barack's pick for Supreme Court Justice, Sonia Sotomayer. It's not only because hers is an historical nomination, she'll be the first Hispanic woman to sit on the Supreme Court, or because she's a true New Yorker, completely self-made or because she seems like an incredibly good and down-to-earth person, a judge with compassion and empathy and smarts...no...it's also because she owns two pairs of Bonbon earrings...it's true!

Bon bon in the halls of justice!!

i'm excited about her, too! now, more than ever. she obviously has impeccable taste in jewelry.

That is tooooo frickin' cool!

bonbons only make her that much more awesome. hooray!

That's such a wonderful surprise! A Supreme Court justice with style? Yes, please -- especially since she's got a smart style and wore your earrings. Sweet!

any press pics of her in her bon bons??
xoh

weee!!! Love that she owns Bon Bons!! I am so proud of this moment - a qualified nominee and a Latina. I met her once at a law school banquet...back in 2003. very cool.

LOVE this bit of news. I adore her so much more now!

(Um, what does that say about ME?)

alright deb!!! that is the coolest thing i have heard in a long time!!! now i am even more excited... she has good taste too!!!

oh la la, me to is thrilled and to know that she is a fellow bon bon connoisseur makes it that much more special!